Why I love THE BROTHERS WARNER

I received a HUGE compliment recently, an 8 year old fan of THE BROTHERS WARNER documentary came into my life. Valentina Nenadich is from New York City.

Her father contacted me via e-mail saying, “I write to you because my daughter is a big fan of classic cinema. It doesn’t surprise me because I’m a great classic cinema fan since childhood. What I do consider amazing is the fact that she’s only 8 years old and has always been attracted to anything Warner Bros. She saw the ad for “The Brother’s Warner” DVD and made me purchase it immediately. Since then we have viewed the documentary close to 40 times and she pretty much has many of the comments memorized, she also has an incredible attraction to Jack Warner as a character of old Hollywood and is fascinated by your family’s history. It would be a blessing to have you contact her (or send her a pic) being that she is enthralled by your family and this fantastic documentary, which I consider so important to American history.”

Enjoy what 8 year old Valentina had to say: 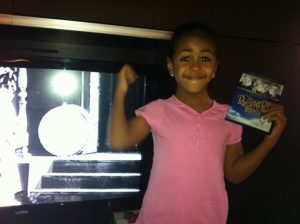 “I like the Warner brothers because their model of potential and motto for education make me feel like I can show the way as well. Harry, Albert, Sam and Jack were always poor and when they got together as a team and focused on an idea it turned into an empire. From CASABLANCA to Merrie Melodies, it made them millionaires. They changed the way movies were made and created Hollywood.

Harry Warner- A symbol of a leader and a great man for his willingness and passion to do what was right! Albert Warner- Was giving and in great shape and never made a sound. What a life! Sam Warner- Good ol’ number 3, was giving and traditional and also had an awesome brain! Talk about an Einstein!

Jack Warner- He was my favorite! A colorful character that gave a very young Hollywood its personality. The youngest of the four, very smart, ambitious and in reality a good man!”

The greatest reward I receive is inspiring others with this film, and I absolutely LOVE that Valentina feels like she “can show the way as well!” I can’t wait to see what you bring to the future, Valentina! Thank you for reaching out to me!

I’m happy to announce that Valentina is now an honorary “Warner Sister!”

All the best to you and what you’re creating!
Cass