Hopper: In His Own Words

A Film by Cass Warner Sperling 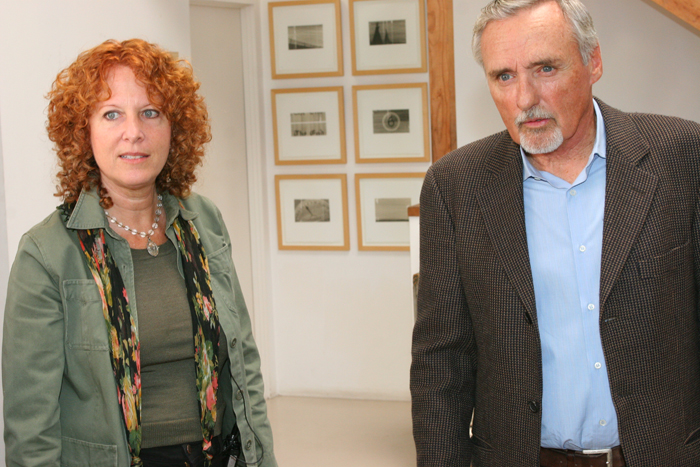 HOPPER: IN HIS OWN WORDS, a new feature-length documentary about Dennis Hopper, one of Hollywood’s most iconic actors, features no talking heads or pundits, but only the legendary “wild man” talking candidly about his long, yet erratic film career. The documentary has a legendary pedigree as well, as it was written, directed and produced by third generation, filmmaker, Cass Warner Sperling.

On a late afternoon in February of 2007, Cass Warner, the grand-daughter of Harry Warner, patriarch of the fabled Warner Bros Studios, visited with Dennis Hopper at his home in Venice Beach. Cass had a mission – she wanted to know the real Dennis Hopper – were all the stories she had heard really true – was he really the studio pariah, the rebel filmmaker, the freakish rogue who brought a demented psychotic intensity to his roles, or were they just part of the Hollywood fabrication machine. What Cass captured on camera that day with Dennis, was candid, insightful and historically compelling – now meet the man and artistic icon who defined a generation, and whose contribution to the hippie counter culture is now legend. This is the most intimate, exclusive interview ever undertaken where Dennis Hopper has given freely of himself, his career and his world, and an in depth view of the metamorphoses of Hopper’s career and artistry.

A restless maverick and sometimes self-destructive genius, he became revered and reviled for his perfectionism. But few people understood the man behind the madman who brought an almost psychotic intensity to roles in EASY RIDER, APOCALYPSE NOW, BLUE VELVET and dozens of other masterpieces. Dennis Hopper bridged the gap between old and new Hollywood, working with actors such as James Dean, Marlon Brando, and Sean Penn, and directors like George Stevens, Nicholas Ray, David Lynch, Francis Coppola, and Tony Scott. His first directing effort, EASY RIDER, forever changed the history and direction of independent film.

Says Warner Sperling, “We combined my very personal, candid conversation with archival footage and photos, and crafted a revealing portrait of the actor, director, writer and artist who defined a generation and created one of the film industry’s most enduring and revolutionary legacies. “Dennis had nine lives,” said Warner Sperling. “The amazing thing about him was, although he was down and out and near death in the ’70s, he was able to confront his demons and rise like a phoenix to become one of Hollywood’s most admired renaissance men. And although he had years of drug and alcohol abuse, his mind and memory in his later years were clearer than most teenagers. He was truly a remarkable man, and this documentary displays his most intimate insights and recollections of his career as a Hollywood outsider. It’s an honor to contribute to his legacy this way.”

The Academy Award®-nominated actor passed away on May 29th, 2010, but shortly before discovering he was terminally ill, gave this in depth interview detailing his nearly six-decade career. He received a long deserved star on the Hollywood Walk of Fame two months before he passed, and there was a posthumous retrospective of his artistic work at the Museum of Contemporary Art in Los Angeles.

Dennis Hopper excerpt – “I did a television show called “Medic”, and I got nominated for an Emmy, and seven studios called me, and wanted to sign me to a contract. Columbia was actually the first one to call and Warner Bros. was the second. So I went and had a very unfortunate meeting with Harry Cohn. He said he’d just seen me in the show, and he thought I was the most naturalistic actor since Montgomery Clift. And then he said, ‘What have you been doing?,’ and I said, “I’ve been playing Shakespeare down at the old globe theater in San Diego”. And he said, ‘Oh my god, Max, Max’ (Max Arno was the head of casting), he said, ‘Give the kid some numbers, send him to school, but take all the Shakespeare out of him, we can’t, we can’t have any of that in motion pictures.’  I told him, “To go screw himself,” and at that point he said, ‘What?’ and kicked me out of the studio, and the agency, and I was banned from Columbia until I came back with EASY RIDER.”

Hopper: In His Own Words

The new feature documentary produced, written and directed by Cass Warner (The Brothers Warner) doesn’t present Dennis Hopper as one would normally expect. It doesn’t give his life story, doesn’t even mention his personal life and disregards quite a broad and important part of the actor’s career. Rather, this film allows him to present himself in anyway he chooses and to cover whatever topic or time of his life he wishes. One of the most iconic, rebellious, controversial, wildly misunderstood and passionately loved actors that the world has ever known, sits on a chair and bears it all. From his first break at the age of 18 alongside James Dean, to the loss of his close friend, his runs-in with high-maintenance director Henry Hathaway, his production of a series of independent films and the making of Easy Rider, to his return to the studio life and his broad acceptance in both the mainstream and independent cinema world, Dennis Hopper gives us everything the way he deems appropriate.

His own narration in 2007 as captured by Cass Warner’s camera, intertwines with a meaningful and highly appropriate interview that the actor gave in 1969 where he talks about Easy Rider, the ideals that the making of this iconic film brought forward, the actor’s own radical principles, his refusal to follow direction, his desire to play each part the way he thought appropriate and his common disrespect for the man, the director, the big name behind the film. And even in his self -presentation in 2007, he still stands by his unconventional principles. Although widely accepted by both big studios and independent filmmakers, Dennis Hopper seems to still love to do things his own way, he is cleverly sarcastic, down-to-earth and always in a state of revolt. No directions, no rules, this is his story and he will choose how he’s going to tell it. Besides, judging from his general defiance of authority, it comes as no surprise that he is left entirely free by the filmmaker to do and say whatever he pleases without interventions.

The documentary’s script sign Cass Warner and Susan Morgan Cooper, and together, they deliver the warmest and most sincere portrayal that this legendary actor could ever wish to achieve. When I watched the film, Cass Warner respectfully added to everyone who congratulated her for this heart-warming and light-shedding documentary, that it was not her doing, but rather, Hopper’s. And I agree that without Dennis Hopper the film would have no base to stand on, but at the same time there is a distinct mastery and artistic intelligence to be found in the filmmaker’s choice of subject and her initiative to simply allow the actor to speak for himself, without many questions, without comments, with the occasional and unavoidable laughter, but ultimately, with no interference whatsoever. Hopper: In His Own Words is a film filled with appreciation, admiration and respect towards this Hollywood legend.

The documentary is edited by Tyler MacIntyre who puts all the material together in a highly skillful manner. Indeed, as the filmmaker Cass Warner stresses, the film is still rough around the edges, but somehow I’m not convinced that this is a bad thing or that this is not, funnily enough, what makes this documentary so personal in the first place. The simplicity of the project is what I found the most appealing aspect of it. A Dennis Hopper we all want to get to know, sitting in a chair in his Venice Beach home, simple, smiley, casual and very talkative, opening up to us fully and only giving time for stock footage and photos to interfere briefly, before he comes back on to give us yet another great anecdote. The man who changed the history of independent cinema with Easy Rider, the motorcycle movie maverick, the actor that defined an entire generation and the industry’s most unknown revolutionary sits casually, laughs, makes jokes, and allows everyone to see that he is not so much a self destructive genius or a psychotic madman that audiences and press rushed to make him out to be in the 1970′s, but rather an artist who fought his brief demons and rose to become one of the most accepted and admired men in Hollywood, while refusing to compromise his ideals.

Hopper: In His Own Words is a warm, honest and personal portrait of the actor who brought studios and independent cinema on the same level, gave his generation a voice and made motorcycle-hippie films just as respectable and artistic as big productions casting Rock Hudson and Elizabeth Taylor. Cass Warner delivers a film truthful to its subject, filled with respect towards a great talent and admiration for a brilliant man.