“The Brothers Warner’ is a well-made, fascinating documentary. Cass has not only honored her grandfather’s legacy with this work, she’s also paid homage to one of the guiding principles of the four Warner brothers who founded the studio by producing a film that will educate, entertain and enlighten audiences.” 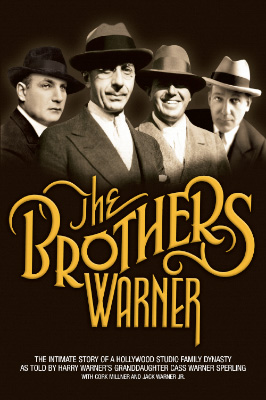 THE BROTHERS WARNER is an intimate portrait of the four film pioneers who founded and ran Warner Bros. for over 50 years. 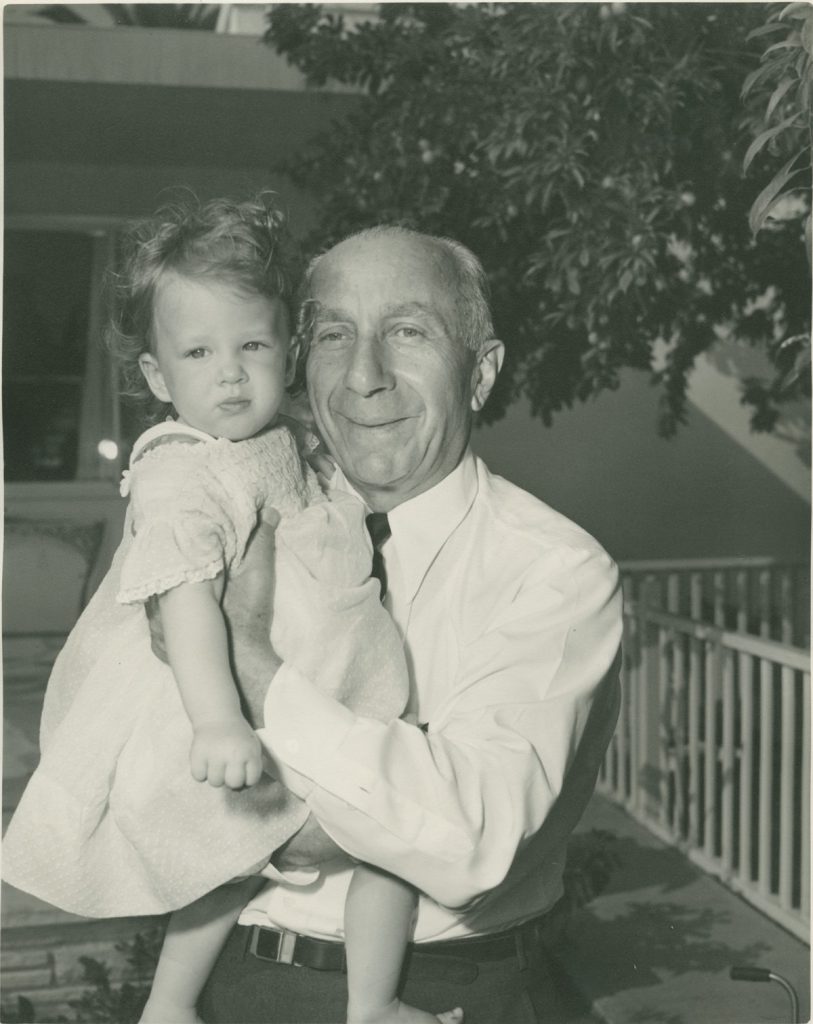 This is the inside story of the little known major player in the Warner Bros. studio legend, Harry Warner, honest Abe, visionary Sam, and volatile Jack — the original Hollywood independent filmmakers. This close-knit band of brothers was the first to use mass media to “educate, entertain, and enlighten”.

Their legendary scrappy rise from nothing, their overcoming of personal tragedies, and their battles are all woven together with the times they lived in. From opening their first storefront theater by hanging a sheet on the wall and borrowing chairs from a funeral parlor to creating one of the top studios in America, four brothers built an empire on a dream and revolutionized Hollywood creating the first major studio with a social conscience.

It was an especially hot day at my summer camp. As I stood listening to my father on the phone tell me Grandpa Harry ‘passed on’, a thud happened in my universe. I could feel myself grabbing for fond memories that were turning from color to black and white without the presence of my grandfather in them.

The last time I saw him flashed into my mind: He lay on a perfectly starched bed in an anti-septic smelling bedroom. A mysterious force drew me to him as if he were a candle in the dark. It was a gentle force. His eyes were opened and moved to take me in. A slight smile came across his lips. I watched his hand start to slowly move across the sheet toward mine. My hand immediately wrapped around his. The enormously kind look in his eyes embraced me as it always did. I felt his grip strengthen transmitting and sealing an important request — something of great importance was being entrusted to me. I squeezed back. A promise was made!

I feel a great honor and privilege to have fulfilled that promise!

Arlene Donnelly Nelson is a director/cinematographer/producer with degrees in philosophy and fine art photography. She served as director of photography on The Beaches of Agnes (2008), as well as Christopher Guest’s film, A Mighty Wind, as well as additional photography on For Your Consideration for Castle Rock/Warner Bros. Nelson photographed Voices of Woman, a documentary on the Worldwide Women’s Conference in Beijing, China. The film reached thousands of women as it toured the country and was screened at the White House for President Clinton and Hilary Clinton. Nelson made her directorial debut with the award-winning documentary Naked States and the sequel, Naked World which were broadcast on HBO as part of its ‘AMERICA UNDERCOVER’ series. Positively Naked completes the trilogy and was awarded the HUGO Award for best documentary: Humanities and Arts.

As of November 2008, David Campbell as an arranger, composer and conductor has won 6 Grammys and 20 Grammy nominations as well as 2 Oscar wins and 4 nominations for albums he has worked on! As a composer his work can be heard in such films as Night of the Comet, Risky Business, All the Right Moves, Backbeat and many others. As an Arranger, he has orchestrated the soundtracks for such films as Rent, Brokeback Mountain, and Dead Man Walking. Numerous songs he has arranged for films, including Phil Collins’ Tarzan, have been nominated for Grammys and Oscars. David plays a slew of instruments including the violin, viola and piano, and has played on best-selling albums for the likes of Marvin Gaye, Bruce Springsteen and Barbra Streisand among many others. Today, Justin Timberlake, Maroon 5, The Rolling Stones, and many others can currently be heard playing to the arrangements of David Campbell. As of May 2007, David had arrangements on up to 11 of the nation’s 200 top-selling albums. David Campbell: Arranger, Composer, Conductor
‘(My Father) always had an ear for the weirder harmonies. That’s probably what he passed to me.’ – Beck

In December 2005, Kate Amend received the International Documentary Association’s inaugural award for Outstanding Achievement in Editing for her work which includes two Academy Award- winning documentary features: Into the Arms of Strangers: Stories of the Kindertransport and The Long Way Home.
Amend also received the 2001 American Cinema Editors’ Eddie award for Into the Arms of Strangers, and edited the 2001 Oscar-nominated documentary short On Tiptoe: Gentle Steps to Freedom. Her film, Beah: A Black Woman Speaks, about the late actress Beah Richards, directed by Lisa Gay Hamilton and produced by Jonathan Demme, received a Grand Jury award at the 2003 AFI Film Festival, aired on HBO in February 2004, and received a 2005 Peabody Award. Coyboy Del Amor, a film she edited and co-produced, received both the Audience and Jury Awards at the 2005 South by Southwest Festival and was broadcast on Showtime in April 2006.

Credits include: Steal a Pencil for Me (2007); Jimmy Carter Man from the Plains (2007); Thin (2006) andThe World According to Sesame Street (2005) which premiered at Sundance in 2006; Peace by Peace: Women on the Frontlines (PBS, 2004); Pandemic: Facing Aids (Bill and Melinda Gates Foundation and HBO, 2003); Bataan Rescue and The Great Transatlantic Cable (PBS’ American Experience); The Girl Next Door (Sundance ’99); Free a Man to Fight (History Channel, March 1999); Tobacco Blues (P.O.V., 1998); and Some Nudity Required (Sundance ’98). Other credits include Asylum and Skinheads USA (HBO America Undercover), and the feature documentaries Legends about the longest running show in Las Vegas;METAMORPHOSIS: Man into Woman, a Sundance award-winner; and Spread the World, a film about the acappella group The Persuasions which premiered at the Smithsonian Institute and on PBS.
Amend is on the faculty of the Cinema Department at the University of Southern California and is a member of the Academy of Motion Picture Arts and Sciences, American Cinema Editors, and the International Documentary Association. She holds degrees from the University of California, Berkeley and San Francisco State University.

Driven by his love of artistic expression, Stephan Malik focuses his creativity into the practice of editing. His visual and musical background infuses his approach with a style that is all his own. Broadly experienced in a variety of formats, he is able to take the director’s vision and craft it perfectly to achieve any desired look and feel.

With an in-depth understanding of film composition, Stephan understands the importance of rhythm and cadence in association with emotive storytelling. The balance between the selection of superior imagery, and the manner in which it is used, makes a cut successful. With additional training in instrumentation and graphic design, he knows the importance of how both the auditory and visual elements are woven together to make a piece truly come together.

It is the combination of his natural creative drive and learned technical skills that have propelled him thus far as an editor. Stephan has based a career around his appreciation of art and continues to refine his talents by continually immersing himself in projects, of any style or format, that come his way.

COMMENTS ABOUT THE DOCUMENTARY

“The Brothers Warner’ is a well-made, fascinating documentary. Cass has not only honored her grandfather’s legacy with this work, she’s also paid homage to one of the guiding principles of the four Warner brothers who founded the studio by producing a film that will educate, entertain and enlighten audiences.”

“I was riveted by this story. It’s a wonderful, intimate, deeply interesting film about the actual Warner brothers, illuminating the personal history behind the studio.”

“ Thank you for making this film and making it available to be seen on the big screen! I think it has one of the most important messages of any film in that it deals with the responsibility of the filmmaker for the world around him. Your ancestors set a very high bar in this respect. Well done on creating a film that ensures their courage and compassion will be remembered and will inspire future generations of filmmakers.”

“ Your film is deep, tangible and took the mystery of these unknown titans away for me. It successfully reflects the Everyman vulnerability in a touching and cinematic story of family. Brava!”

“Thank you so much for one of the greatest documentaries I’ve ever seen — the one on your family, that preceded the final installment of the Warners 3-parter. Bravo. So moving, and so well made. And you are so lucky to have such treasured moments captured on film. Thanks again for such a wonderful evening of entertainment.”

“It was elegant, moving and walked the line between art, entertainment and history – a true feat!

…Your narration, family connection and moral through-line made the piece unique and important.

I know your grandfather and all the brothers rest more peacefully after your effort.”

“What a great accomplishment! Thank you for sharing your families history. The story kept me intrigued from start to finish.”

“I viewed your documentary yesterday and enjoyed it very much. It gave me strength to fight on as I have been scorned as your grandfather had. Not losing near as much; but being done wrong in this business has the pain of the projects and experiences lost not the money…. Seeing your film gave me strength to carry on and search out my success…. Great history, story and story telling through your vision. Thanks.”

“I thought the documentary was excellent. I enjoyed it more than “The Warner Bros. Story.” There was such a nice, warm feeling to “The Brothers Warner.” Granddaughter Cass has a beautiful, beautiful voice, and made the lives of her Dad and uncles come to life. There was a lot of love in how the story was told. Cass Warner did a wonderful job.”