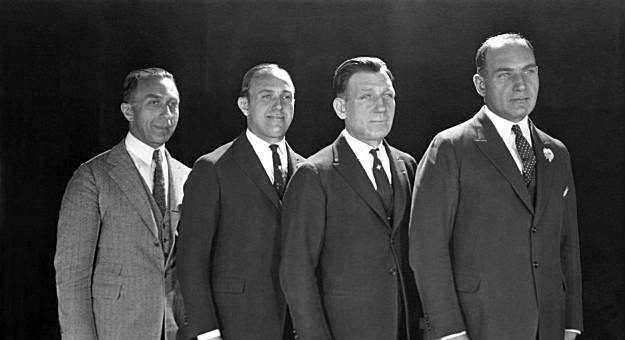 Intrigued by my grandfather’s ability to envision what the audience’s wanted in 1926, I was happy to find this newspaper article which reported:

“Harry Warner comes first because he’s the oldest and the presiding genius over all their plans.  It was he who visualized the great possibilities in Vitaphone when it was offered to him as an obscure invention—which most of the filmdom’s other great magnates had the same chance and turned it down. Now he foresees a future for the principle that his device represents, so great that it staggers any but a great imagination.

‘The next step’, he says, ‘will be the actual introduction of speaking into the motion picture…the very thing many people have been waiting for.  At first it was a question as to whether the public wanted talking movies.  Now it has been proved that they want to hear certain parts of the Vitaphone program, at least, devoted to that.’“

Devoted they were, as they were developing THE JAZZ SINGER–the film that would launch them into another league.

As for the educational possibilities of the instrument, he believed that not even the surface had yet been scratched, and that it would only be a question of time until most of the schools and colleges in the country will make use of it.  Lectures by the greatest of all professors could now go the rounds instead of being merely presented in one classroom.  Students would not have to travel far and wide to hear certain famous learned men.  (Remember this is 1926, folks.)

The article continued with “Warner is a humanitarian and an idealist.  His next startling statement proves it:  ‘Vitaphone may even serve to eliminate war among the nations.  We think of the film as the greatest of all the media for propaganda.  We know that American movies are bearing a silent message of our progress to the people inhabiting the globe.  These same films may now go a step farther—they may even carry an actual message through a speech spoken by some character, perhaps, of America’s doctrines for world peace.’”

What honorable intentions and insight for the future of such a powerful medium!